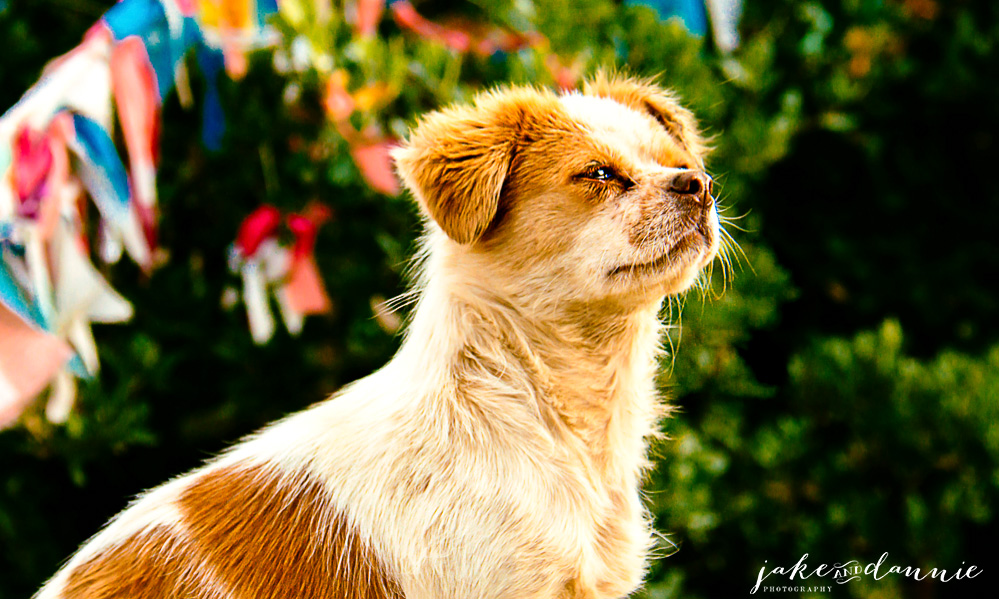 I was beginning to regret our decision to walk to Lige. The road from our hotel to the small lakeside village ran along the steep slope of a dusty mountain, bustling with traffic and littered with small stones which occasionally tumbled from above, coming to rest on the cracked pavement. The heights made Dannie nervous, and the sun beating down on was burning our skin. 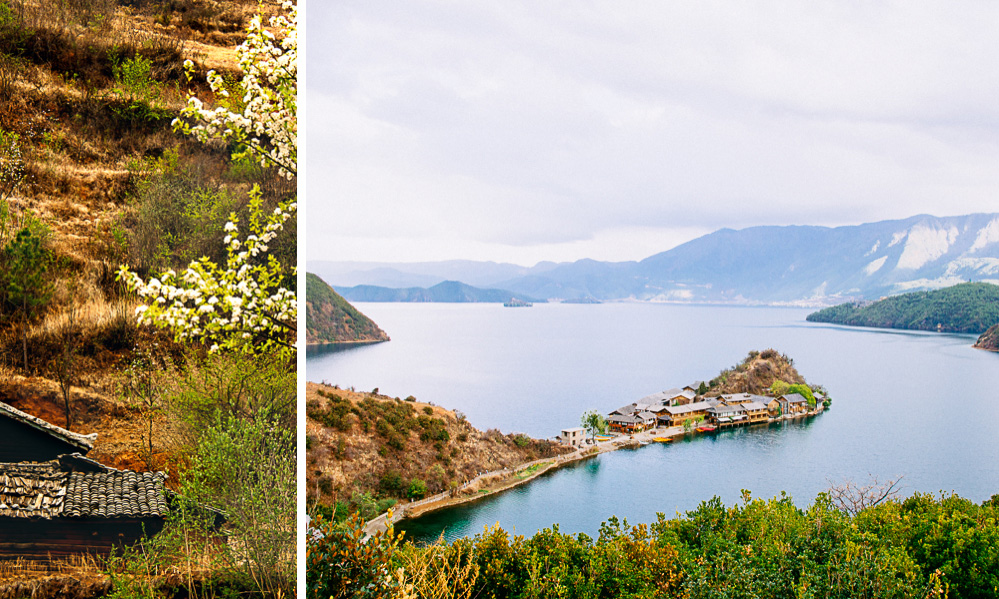 It was beautiful though. The water of Lugu Lake was as blue as ever (seriously, in photoshop we can’t touch the blue for fear of making it look fake), rivaled only by the sky. The wind provided some relief from the heat, and when it blew it lifted colorful flags that had been hung from strings all over the mountainsides. I wasn’t sure whether the flags were of any meaning, territorial, religious, or celebratory, but they reminded me of kite strings as they rose and fell and ruffled in the breeze. 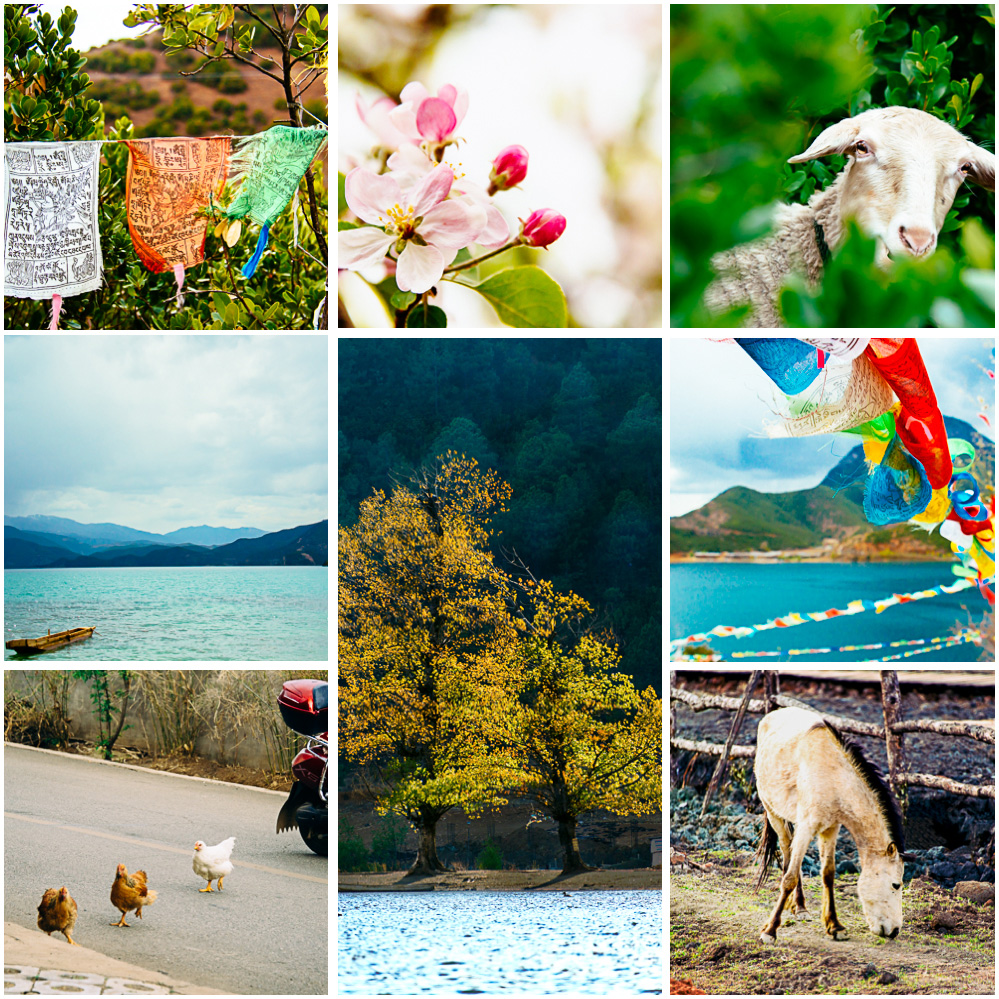 Finally we came to a bend in the road from which we could see Lige. The village rested on a small peninsula that jutted out into the lake like a swollen thumb. It was the most popular destination for Chinese tourists who ventured into this region, and they could be seen walking the streets, and drifting casually along the water in colorful boats. I recognized this view from photographs we’d seen while researching the village, and I knew I was not the first person to stand here with a camera. 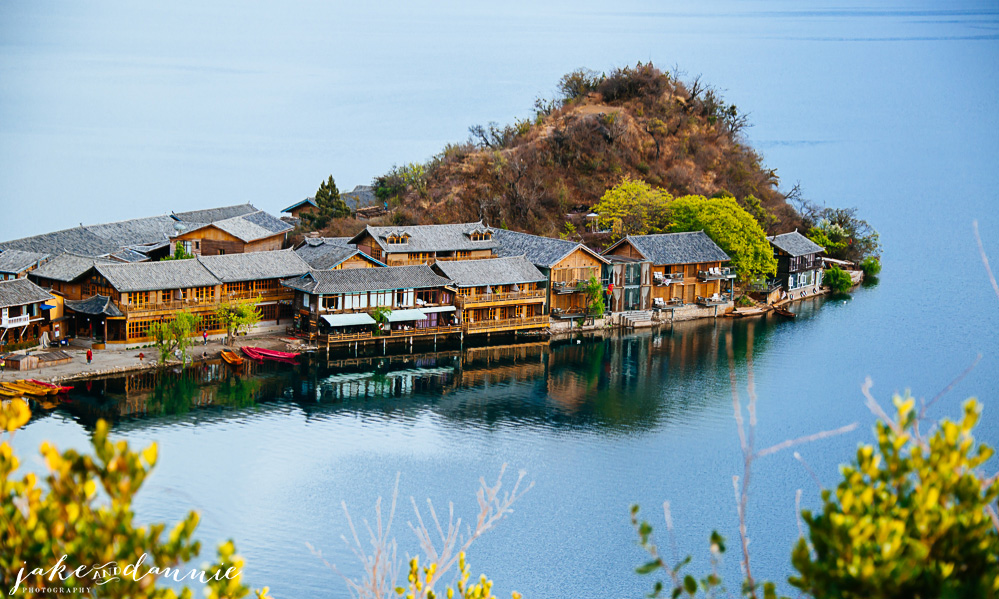 The rest of the road was also visible. It followed a circuitous route, winding it’s way along another series of cliffs before slithering down and doubling back to reach Lige. At least another mile lay between us and our destination, and I realized that I had badly underestimated the time our walk would take us.

“We’re going to be late for dinner,” I told Dannie. She was looking at the cliffs we would have to pass if we continued, taller and steeper than the ones we had just navigated.

“I don’t want to go anymore,” she said, “my legs are tired and we’ve been walking all day.”

I put on a thoughtful face for a moment, even though I already agreed with her. We had been walking to one place or another all day, and I didn’t much like the idea of walking back at rush hour, assuming such a thing existed out here. “I’ll tell you what,” I said, pointing, “why don’t we walk down this staircase first, then turn around.” 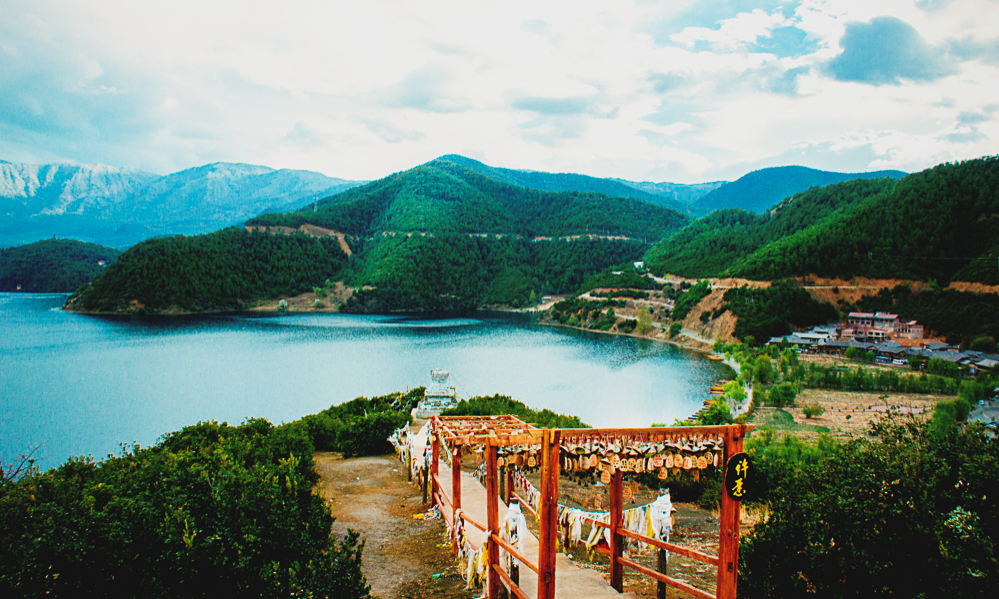 About twenty cement stairs made a lazy descent from the road. They led to a flag festooned shrine overlooking the village and the lake. Dannie nodded and we made our way down. Above the stairs, tourists had hung wish charms, presumably because they thought this place would be lucky, and the little wooden paddles brushed my hair as I passed by. I stopped for a moment to take some photos of the charms. I thought they looked nice, but Dannie said they were nothing special, just knick knacks sold to tourists for a buck or so by the locals. 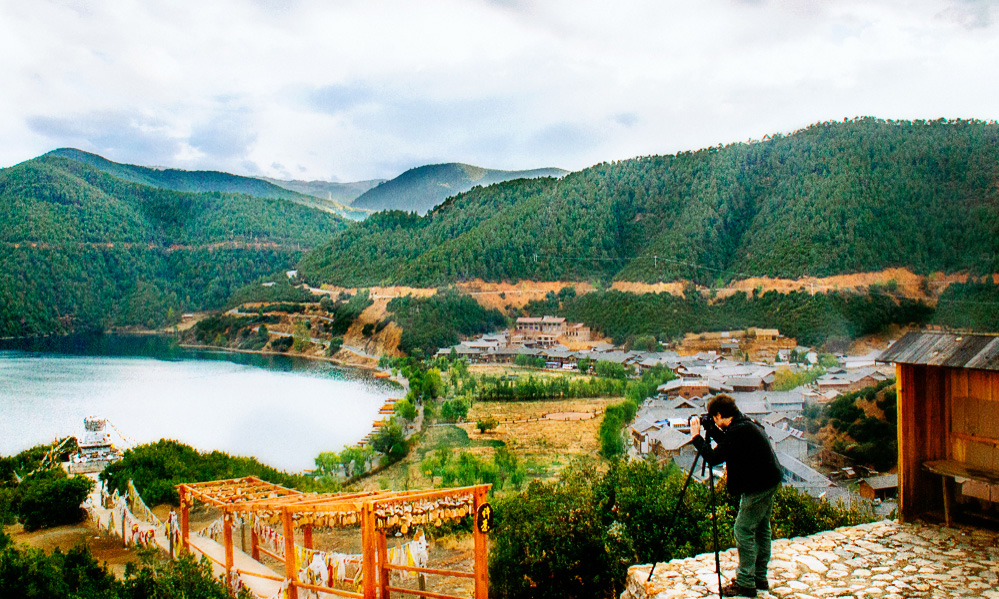 By the time I was done with that Dannie was already at the bottom of the stairs. I hurried to catch up with her, and saw that she was laughing.

“You’ve made a friend,” she said, and I followed her eyes down and saw that I was being followed by a dog. It was a small dog, perhaps just a puppy, mostly white mottled with reddish brown spots. Like all the dogs in the area it was dirty and thin, with fur that needed brushing. It hung by my feet as I walked down the stairs, sometimes leaping a few steps ahead, sometimes dropping back to trail me. When I stopped to take take a photograph of Dannie, the dog tugged playfully on my pant leg.

“That’s one cute puppy!” I said, and Dannie took some photos of me leading the dog around. We walked around the shrine snapping pictures of the flags and the stones and village below. The dog stayed with us, eventually sitting down and watching us.

“Can I feed it?” Dannie asked.

Before I could tell her I thought it was a bad idea, she was already going through my bag looking for one of the meat buns we had packed for our hike. She tore it open and placed it in front of the dog. He looked down at it and gave it a sniff out of passing curiosity, but appeared to be otherwise uninterested. Dannie wasn’t sure what to make of this.

“If he’s not begging for food, what do you suppose he wants?”

“Maybe he just wants some attention,” I said, “we should take some pictures of him so he can have the spotlight for a while.”

We circled around him snapping away with our cameras, shooting him from this angle and that, trying to put him against different backgrounds and getting him to turn his head so that the lighting would be just right.

But as we went through our memory cards comparing shots, we noticed that as time went on the dog’s expression lost its playfulness. He looked sad, lost, mournful. Upon further inspection, he had looked this way all along, even when he was following me down the stairs, tugging on my pant leg. 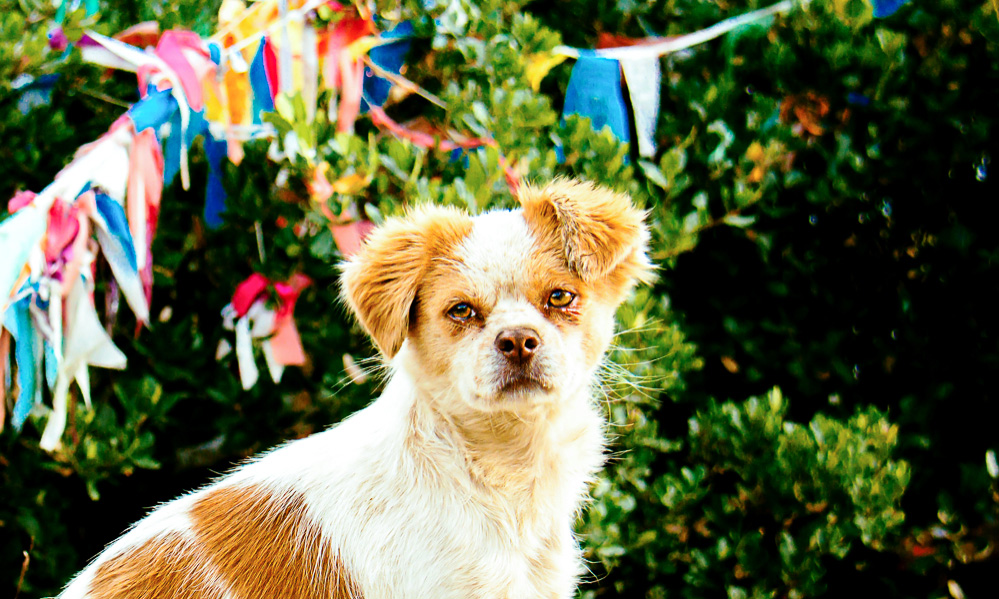 How could we have missed it before? And what had made this puppy so sad? Now that we had noticed, it was undeniable, the dog stared off into the distance, then hung his head low. Dannie tried again to get it to eat the bun without success.

The mood killed, we decided to head home. As we walked up the stairs, we heard the pitter patter of the dogs feet as he began to follow us again. I turned around and he seemed to be tugging at me with his eyes, begging us not to leave. When I made to start walking again he ran up and pulled gently on my pant leg again. I stopped.

“What do you want?” I said, a little louder than I’d intended. “I can’t bring you home with me!”

The dog leapt from the stairs and stood in the dirt just to the side. He looked up at us, eyes filled with unreadable meaning. As we started walking again he began to dig in the dry soil, throwing pawfulls of dust behind him.

“At least he’s interested in something else now,” I said as we walked away.

Dannie was quiet for a while, then she said “I think you must have known that dog in a past life.”

I let her continue.

“My mother told me a story about a donkey that labored in the fields near a Buddhist monastery. One day the donkey broke free from its bonds and ran up the mountain toward the monastery. Nobody could stop it. It broke through the gates and ran into the building, into the office where the monks did their accounting.

“The donkey went to the corner of the room and banged on the stones in the floor with his hooves. He didn’t stop until the monks pulled him away with ropes and returned him to the fields. Later, they noticed that the stone floor was cracked from his hooves. When they removed the cracked stone to replace it, they found a bag of gold buried underneath.

“It turned out that the old treasurer for the monastery had been stealing gold and burying it under the floor. When he died he was reincarnated as a donkey as punishment, but in order to fix his Karma he had returned the stolen gold to the monks.”

By now we were at least a quarter of a mile from the stairs.

“Dannie,” I said, “do you think that dog was trying to lead us to buried gold?”

“Every creature has its own karma to work out,” she said. “It’s probably something completely different.” I looked at her and she looked at me, then we both looked back toward the corner with the stairs and the shrine.

In unison we turned and walked back toward the stairs. It was a brisk walk, filled with the energy we had lacked when we decided to forgo Lige. We tried to remain nonchalant, not wanting to give away what we had discovered. In my mind I was imagining what that dog had been digging for. Dannie was right, it didn’t have to be gold, it could have been something cool like a skeleton or a meteorite teeming with alien microbes. Either way, we would be rich and famous. 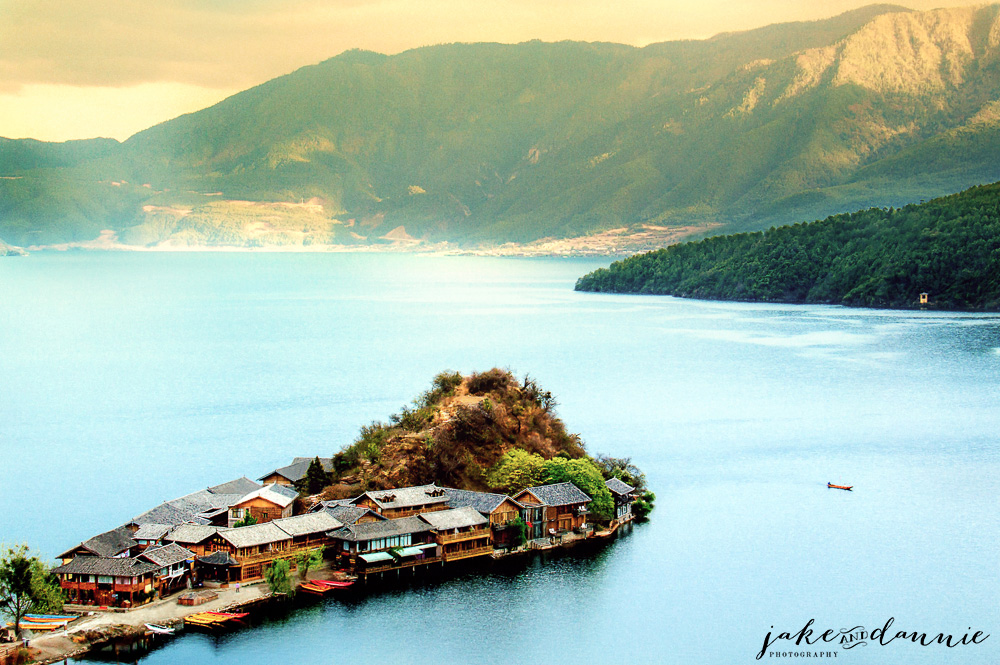 When we returned to the spot the dog was gone. We searched for the place where he had been digging, but the soil was so torn up from tourists’ feet that one spot just looked like another. I found a couple likely divots, and dug at them with my toe, but it was useless. We returned to our hotel disappointed but smiling, with no treasure but a story.

From the Bottom of the Rockefeller Center: Travel Photography from NYC, New York 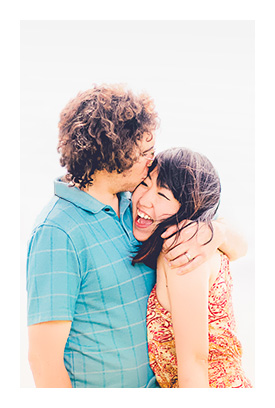 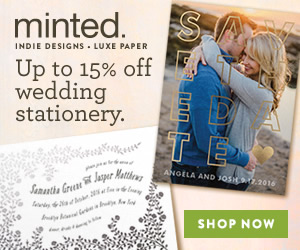